Spending time on painting is quite a luxury these days. I took an interest in older Gem’s HBL art homework and decided to work on it as well! That’s to create an art piece of the jungle, drawing inspirations from Henri Rousseau’s jungle pieces. It’s amazing that Henri Rousseau painted his jungle pieces based on imagination when he had never visited one before! A Malayan tapir in my version after my recent fascination over the animal with repeat visits to the Night Safari the past month.

Diving deeper into Rousseau’s work, we looked at his painting “The Sleeping Gypsy”; a painting of a lion peering over a gypsy in deep sleep. The painting currently resides at the MoMA. We read a book of the same title and it explored a possibility of why only a lion was in the painting, which older Gem found hilarious!

The beauty of an art piece, where you can have your own interpretation and create your wild imaginative ending. Older Gem thinks that the gypsy will be the lion’s breakfast! 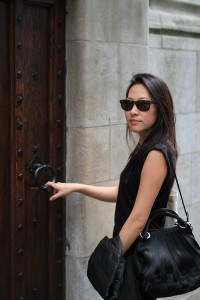 Welcome to Blank Canvas Mum. I am Anthea and you have landed on my canvas, which serves as an outlet for me to share my humble thoughts and inspirations. Journey with me through my activities, thoughts, experiences and memories. Click on the image above to find out more.

📚 Older Gem reads;
Hubby and I at Central Park a decade ago; before the girls came along. Picture book, NY is for New York by Paul Thurlby, from the library brought back so much fond memories that got me digging up old photos.
I always have a stash of coffee filters in my craft cabinet since we use them so often to create different forms; from butterflies to flowers... The girls enjoy doodling them with washable markers and "water" them using droppers or spray (train fine motor skills).
We had a great time at Dale Chihuly: Glass in Bloom, Gardens by the Bay. Checkout our wonderful two day outing over on my blog! Link in bio.
Reflecting on God’s righteousness, grace and glory through Psalm 72.
Mid-autumn festival is round the corner and we spent some time over the weekend to make some snow skin mooncakes.
Loading Comments...
%d bloggers like this: